LOOΠΔ is a 12 member South Korean Girl Group set to debut in 2018 under BlockBerry Creative, a subsidiary of Polaris Entertainment. A new member is scheduled to be revealed every month and 12 members has been revealed since October 2016 until March 2018. Each member have her individual album and solo music video. LOOΠΔ 1/3, the first sub-unit of LOOΠΔ, consists of 4 of the members and have released their first mini album “Love & Live” in early March 2017 as well as its repackaged version “Love & Evil” in May. ODD EYE CIRCLE, the second sub-unit of LOOΠΔ, consists of 3 members, Kim Lip, JinSoul and Choerry, have released their extended play “Mix & Match” in late September 2017 and made their debut in M Countdown on 21 September 2017. Soon afterwards, OEC came back with their repackaged album “Max & Match”, concluding their sub-unit debut journey.

Facts: Scared of Birds, Brings a doll to the practice room

Solo Title Track: Around You

Solo Title Track: Let Me In

Facts: Scared of Birds, Both ears look different, Studied in an American highschool for a year

Month of Release: May

Facts: The most cheerful member

Solo Title Track: One & Only 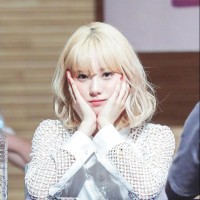 K-Pop
Say hi to LOOΠΔ’s Choerry, the girl of the month of July

New member, Yves was added to the group.

Yves’ birthday is May 24, 1997 (confirmed on her Naver profile). Her animal is speculated to be a cygnet (baby swan), her color is maroon/burgundy/dark red and her solo title track is “new”.

Olivia fruit is blood plum and her colour is grey